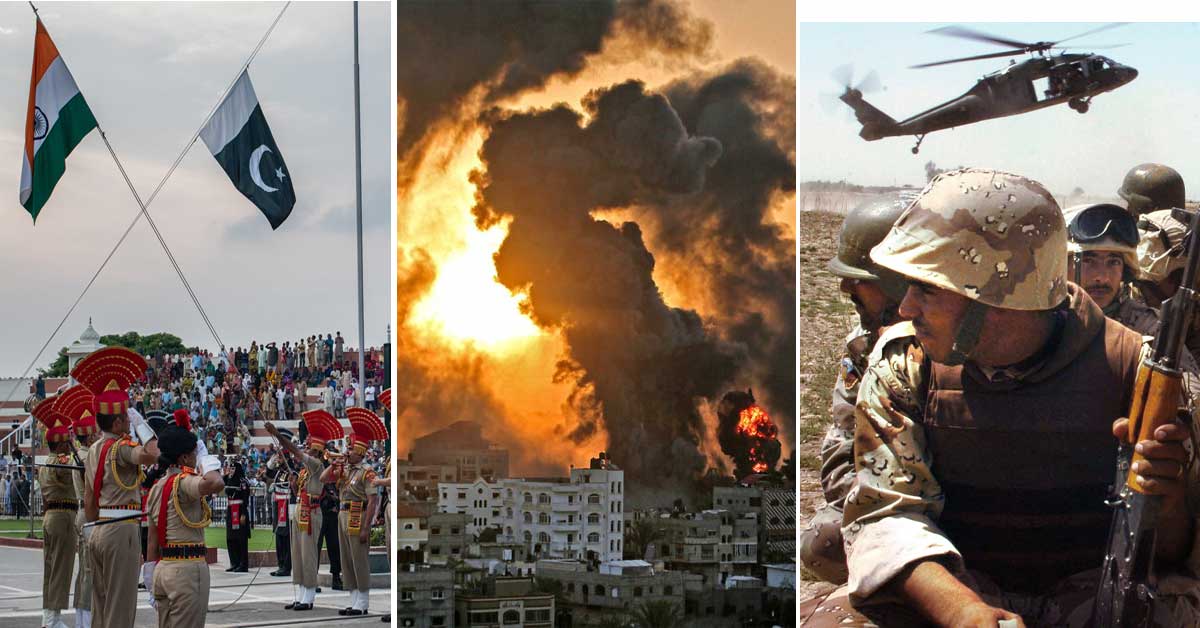 Countries have always been in conflict with each other due to several reasons, most battles and wars were fought due to border conflicts. Such violence isn’t something new in particular but has originated since the beginning of civilisation. Border tensions and conflicts have created more complication than any other enragement among its citizens.

We have not included the Vietnamese conflict since that was a complicated subject with the United States and Soviet Union Civil War.

After almost a century’s dispute, the Cambodian-Thai dispute began in June 2008, sparking great tension between both the countries and their territories. The tension is surrounding the 11th century Preah Vihear Temple in the Dangrek Mountains, a province currently possessed by Cambodia and the Kantharalak district of Thailand. Tensions increased as Thai soldiers moved into the Cambodian territory. The situation was aggressive and the strained relation led to many problems. An agreement was made and both the countries agreed to the cease-fire but neither of the countries has shown confidence in the treaty.

Check out some awesome tech news here at Dos2shell.com

The conflict is an ongoing border tension between the two countries, since the 22-year long civil war that ended in 2005, the death toll was enormous. According to the BBC, around 1.5 million people died due to several reasons during this civil war. The war initially took place between the Sudan central government and some rebels in the South because of the continued marginalisation of South Sudan. The initial breakthrough of the war was in 1955, a year before Sudan became an independent country. In any case, there were thousands of people who lost their life and tension grew to be a religious and ethnic conflict.

The Eritrean–Ethiopian border dispute was by far the most violent impasse in the border conflicts, this tension didn’t end with a severe war with around 100,000 or even more fatalities. The war was outrageous and in a span of two years, the death toll crossed 6 digits. The border conflicts continued ever after 2000, with multiple clashes and another war in 2016. However, in 2018, Eritrea–Ethiopia summit was made where Eritrea gave up all of its claims in Ethiopia and Ethiopia gave up all of its claims in Eritrea. Both the countries have finally agreed on the resumption of diplomatic relations.

07. United States of America and Mexico

The Mexico-US border runs from California to Texas for a total of 1,989 miles, and has the highest number of legitimate annual border crossings in the world. It passes near large urban areas and over desolate deserts. This pushes the 500,000 people trying to cross the border illegally into the desert where several hundred die every year. The zone is particularly dangerous in the El Paso-Juarez region which is known for narcotics traffickers who smuggle drugs, weapons, and people over the border. With around 100s of migrants dying every year, this border is one of the most dangerous borders for civilians.

The China–Vietnam border is the international boundary between China and Vietnam, consisting of a 1,297 km (806 m) terrestrial border. The disputes were settled after the Sino-Vietnamese war but the tension continues at the maritime border. The ownership of this land is currently under dispute and is undefined for that reason. The dispute started since the early 1st century and after the formation of Dai Viet, the Vietnamese land after breaking from the Han dynasty. Since then the conflict continued to remain one of the prominent conflicts in the history, the war was brutal with over 50000 fatalities.

Israel and Palestine have been fighting since the beginning of the Bible, but this conflict is more complicated, according to all sources, the conflict is almost impossible to solve to the geographical limitations. Palestine are just a group of 165 “islands” within the West Bank of Israel apart from the Gaza Strip. Despite a long-term peace process, Israelis and Palestinians have failed to reach a final peace agreement. The conflict continues between Israel and Palestine dominantly with respect to the city of Jerusalem, a land that is considered holy to all Semitic religions.

The Sino-Indian border dispute is a territorial dispute over a large and several small separated pieces of territory between China and India. A particular region of McMohan Line is legally a part of India, however China doesn’t accept it to be a part of India. China claims that while the Simla Convention (a treaty between China and India over the land) was signed Tiber was not even independent and hence they are the rightful owners of that land. The dispute for the land started soon after India gained independence in the year 1947. There were multiple wars fought for this reason and tensions have never ceased to exist.

The infamous war between Iran and Iraq is known to everyone, but did you know that the conflict started long before in the 16th century. The outbreak of the war in 1980 was too strenuous for both countries. The eight years of war-exhaustion, economic devastation, decreased morale, military stalemate, lack of international sympathy against the use of weapons of mass destruction against Iranian civilians by Iraqi forces, and increased U.S.–Iran military tensions all led to a ceasefire brokered by the United Nations. Relations were restored in 1990 and have improved substantially since the overthrow of Saddam Hussein in 2003.

Three wars, numerous skirmishes, a death toll of more than 150,000, and the ongoing building of nuclear weapons only because of some meagre border conflict. Since the independence of India and Pakistan in 1947, these lands have been on constant turf with each other. The displacement of millions from each of the countries ended up piling millions of dead bodies. The beginning marked violence, wars between these countries have killed around 15,000 military force, while as many as 100,000 have died in the disputed region of Kashmir alone.

Check the top 10 Most Popular Photographs ever taken

The Korean Demilitarised Zone is a strip of land between the Korean Peninsula. It serves as a buffer zone for North and South Korea. Though the tension between these countries has considerably reduced since the Korean War, this piece of land is continuously fortified by both countries. According to the reports, it is the most heavily militarised borders with nearly 2 million soldiers patrolling both sides of the border. That doesn’t mean this land is at peace, there have been various incidents in and around the DMZ, with military and civilian casualties on both sides. Since there is no treaty or agreement, technically both the countries are still at war.

This list of Worst 10 countries with border conflicts should teach us a lot of things, with a concept like division and borders we have sacrificed millions of lives. Is it worth for anyone? Did any countries gain anything at all?