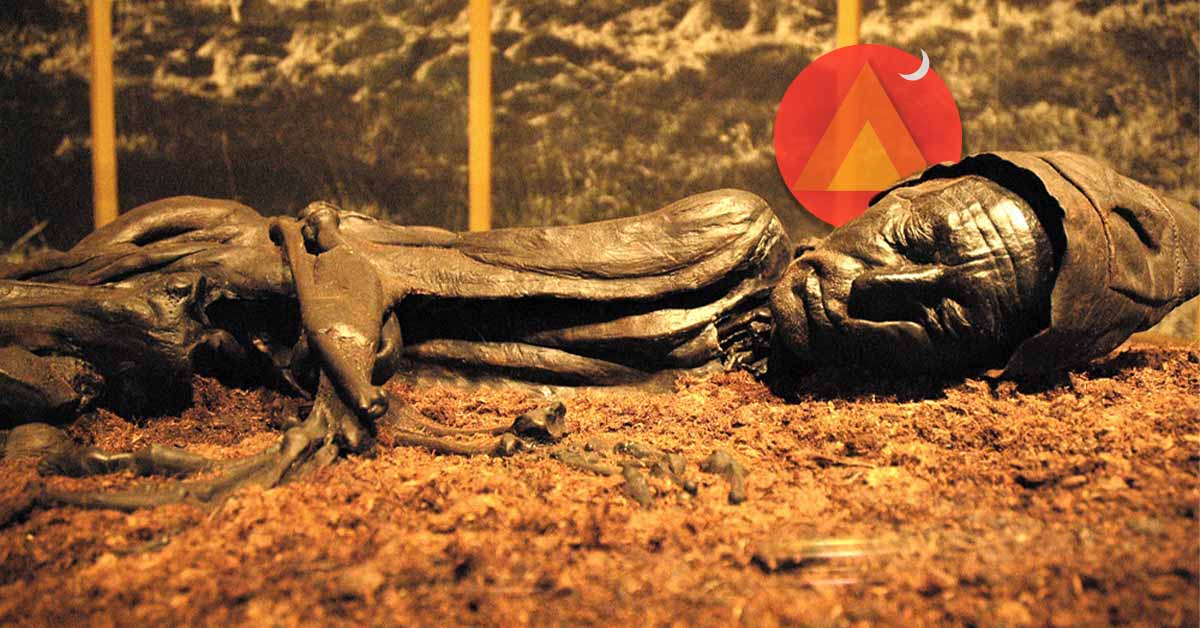 The Lindow Man is a mummified bodily remains found in the Cheshire bogland.

It might have been a pleasant morning for the peat cutter working near the Cheshire countryside. He noticed what was thought to be wood moving along a conveyor belt. He pushed it away, and it didn’t just fell like a piece of wood but hit the ground with dirt and what happens to look like a leg dropped from the piece.

That frightful discovery of 1st August 1984 led to a new archaeological discovery of a new site in England called the Lindow Moss in Cheshire.

Who was this Lindow Man?

He was the Lindow man (Lindow III), is the top half of a male body, found and preserved in the peat bog in Cheshire, England.

His moustache, beard and sideburn made it easy for the archaeologists to identify that the body belonged to a male. He was a well-built person with an estimated weight of 64 kilograms and approximately ranged between 1.68 to 1.73 metres in length. While assessing his time of death, he was radio carboned to around 2 BC and 119 CE and was around 25 years of age. He was naked apart from his fox-fur armband.

It was also analysed through electron microscopic scanning that his hair was trimmed using shears. Based on his basic bodily analysis, it is clear that he was not into hard labour and should be from a wealthy family.

Overall he appears to have been of good physical health but had slight osteoarthritis and an infestation of parasitic worms. Food residue was found in his upper alimentary tract which indicates that his last meal might be a griddle cake made of wheat and barley, a typical food item in the Cheshire area during the 1st century CE.

BTW, did you know that Your smartphone is more powerful than a supercomputer ?

What was Lindow Man’s reason for death?

There are signs that state that the Lindow man was attacked with two blows on the top of his head with a heavy and bladed weapon and also a cut on his throat with a sharp object possibly a knife. There is also evidence of a blow on his back and a broken rib.

There are also evident signs of strangling the Lindow man to death with a thin cord around his neck, but some argue that it would be a necklace that was generally worn by the Druids, a certain group of tribes who lived in the Cheshire region. Or he could have been executed for some criminal involvement or by some others which very much uncertain.

BTW, did you know that that there are 10 Weird and Fascinating Facts about the Oscars!

The first thing everyone remarks on when confronted with one of the bog bodies is their remarkable state of preservation. The Tollund Man, perhaps the most famous bog body, has been called the “perfect corpse,” chiefly because of the exquisite condition of his face and head.

It is also a well-stated fact this location the Lindow Moss was probably a place set for its religious approach and specifically for the religious sacrifices at Cheshire. And by later discoveries, it is further evidence that Lindow man wasn’t the only bog body discovered from this site.

How are these bodies preserved?

These bodies are naturally preserved and mummified versions of remains in the peat bog. Such geographical locations are typically found in the European region especially in the United Kingdom and this Cheshire region in particular. These bodies are chronologically and geographically widespread and have been dated between 8000BCE and 1940CE.

But dissimilar to other ancient human remain, bog bodies are often preserved to an extent where their skin and internal organs are undamaged due to their unusual land condition.  Along with this, this bogland has highly acidic water, minimal oxygen and very low temperature by which these particles are preserved. However the body will be completely tanned, but due to the dissolution of calcium phosphate of bones, the bones dissolve with the bog.

The acidic conditions of these bogs allow for the preservation of materials such as skin, hair, nails, wool, and leather which all contain the protein keratin.