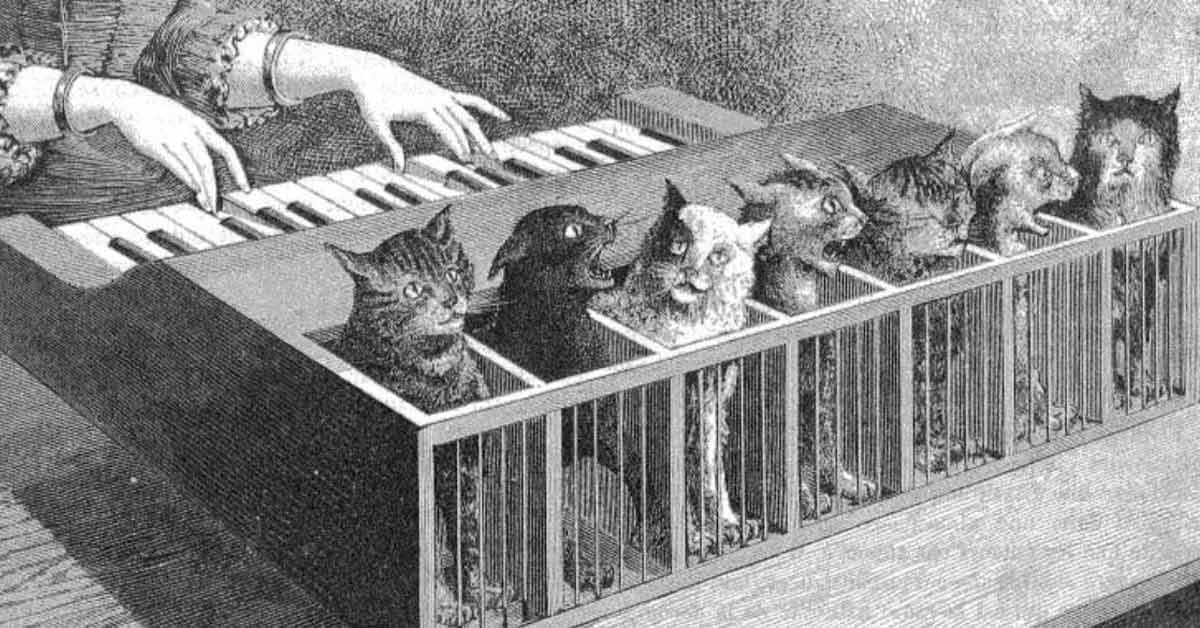 Meet the most creative cure for psychiatric illnesses in the 17th century: a piano made of howling cats.

This is the mechanism of an acoustic piano.

What exactly is Katzenklavier? The Katzenklavier: The Cat Piano, as the name implies, is a piano fashioned entirely of cats. And NO, this isn’t a made up story by Moonjis.

Who makes use of it? Despite certain ambiguous ordering pitch restrictions in the original design, the Katzenklavier was never intended for musical use. It was created specifically for psychiatrists. But wait, there’s more.

What is the mechanism behind it? Based on historical reports of the Katzenklavier, available illustrations shows that the instrument consisted of a keyboard with seven to nine cats housed in cages that corresponded to the approximate pitch of their mewing. The tails of each cat are extended out and held down. Each tail has a nail above it. When you push a key allocated to a specific cat, a mechanism drives the nail into the tail, causing the unfortunate animal to scream.

What is the source of it? You can console yourself with the knowledge that the device was never built (as far as we know). Athanasius Kircher, a German Jesuit renaissance man who worked in the fields of medicine, oriental studies, and geology, created it sometime in the 17th century. Kircher claimed to have invented various bizarre machines, including an automaton statue that could listen and talk, a perpetual motion machine, and the Aeolian harp, among others.

What makes it a classic? Because it’s just too awful to think about! The device was designed to shock mental patients who had lost their capacity to focus out of a “fixed state” and into “conscious awareness,” according to Johann Christian Reil, an 18th-century German physician. When the psychiatrist performs a fugue on the infernal instrument, the patient must be positioned so that they are in direct view of the cats’ expressions. There are multiple “cat pianos” available for the iPhone in these modern enlightened times, and none of them entail the torturing of felines — they’re just a little twee. The great Nick Cave-narrated animation The Cat Piano was also inspired by the Katzenklavier.