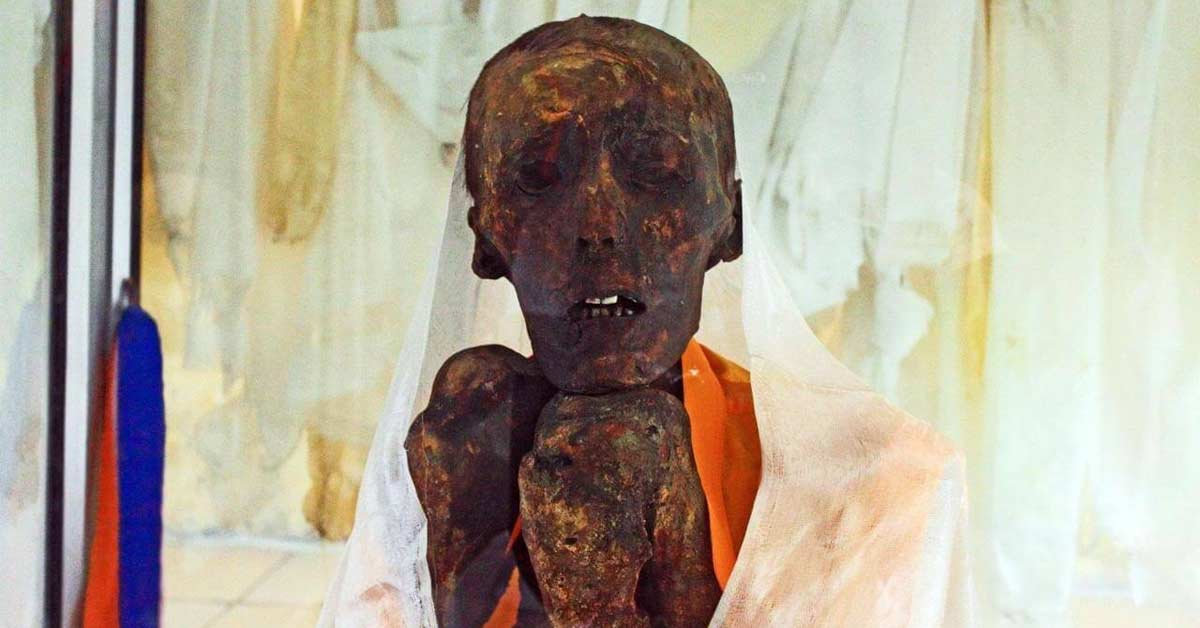 Are there mummies in India, well, you can. Meet the ancient mummy of India in Sanga Tenzi. However, this 500-year-old mummy may have a story to tell.

A small village of Ghuen in Spiti, a location hidden in the beauties of Himalaya has some mysteries that the world might not be aware of. In contrast, definite methods of the ancient tradition of self-mummification have made people question the scientific advances of the medieval world. Here in this village, in a tiny single room concrete structure rests a 500-year old ancient mummy of India. However, it is believed that the remains are of a 15th-century Buddhist monk named Sangha Tenzin.

Explore the tech world at dos2shell.com

How was the Ancient Mummy of India preserved?

It is believed that the Buddhist monks of Japan and Tibet might have some unique methods of mummification. The process for this mummification is somehow tedious and cruel in nature. Apparently, during the time of the monk’s life, the monk was designated to a slow process of starvation. Therefore, his diet ceased the usage of barley, rice, and beans, which add fat to the body. Eventually, as a preparation for his death, candle wax is applied to the body in a slow process. The monk dies of starvation in a seated pose.

Ultimately, when the fats are putrefied, the remains of the monk can be preserved. Following his death, he is placed in an underground room for three years, to continue drying out before again being treated with candles. Later, the monk becomes a statue in prayers. For some reason, not many of these mummies are found around the globe. It is estimated that around thirty of these monks are found mainly in the islands of Japan, Honshu.

Does Israel and Palestine have the worst border conflict?

When was it found?

In an earthquake of 1975, an old tomb was opened, this tomb contained the mummified body of Sangha Tenzin. In the year 2004, the local police excavated the tomb and removed the mummy. However, the mummy was remarkably preserved with intact skin, teeth and hair on his head. He died in the seated position, with a rope around the neck and thighs (an esoteric practice recorded in few Buddhist documents).

According to the natives of the village, it is believed that Sangha Tenzin was one of the mightiest monks of his time. Meanwhile, the village faced severe scorpion infestations where the lives of people had become a mess. Sangha Tenzin asked his followers to mummify his bodily remains to lift this curse from the town. When his spirit left his body, a rainbow appeared and the scorpions disappeared. His sacrifice had preserved the wellbeing of the town. The town lies 30 miles from the Tabo Monastery, an ancient 10th-century monastery.

Now that you know Sangha Tenzi, the mummy of India, learn about Lindow Man, body preserved in perfect condition for 1000s of years

The ancient mummy of India is now on display in a temple in Gue, in the border of Himachal Pradesh region. The body is preserved only two miles away from where it was escalated. Controlled by India-Tibetan Border Police, the town is very difficult to reach. The temple is open for public, but to reach there is not an easy journey.

Explore the beauty of this world at Serene Gypsy