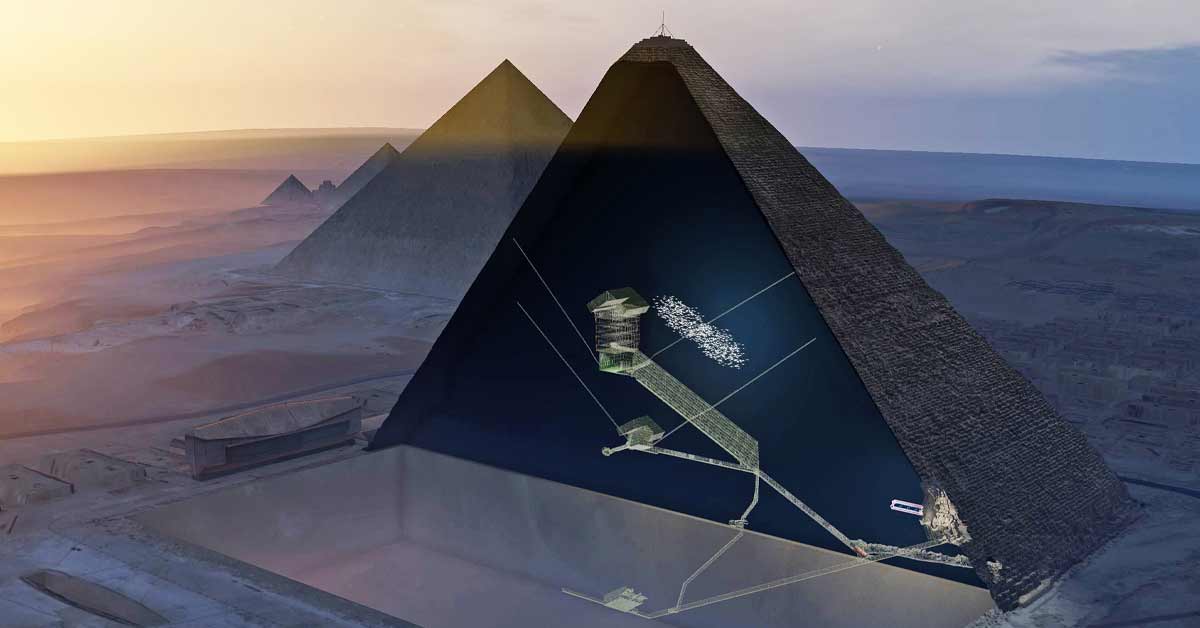 These Interesting Facts about the Ancient Egyptian Pyramids proves that the Giza Pyramid Complex’s structures are true engineering marvels.

The Giza Pyramid Complex, home of Egypt’s most famous pyramids, has been the focus of constant research for more than a century.

The Great Pyramid of Giza, the Pyramid of Khafre, the Pyramid of Menkaure, and the Great Sphinx of Giza are all located in this area. The pyramids have revealed secrets once only known to their architects throughout time and via archaeological investigation.

And these are only a few of Egypt’s many pyramids.

From alignment of pyramids with stars, hidden shafts to sapphire toothed saws, these are the most interesting facts about the Ancient Egyptian Pyramids, the marvelous engineering.

Would you believe us if we told you that some of the stone blocks used to construct the pyramids are over 70 tonnes in weight? Each of the 2.3 million stone pieces in the Great Pyramid weighs about 2.5 tonnes on average. However, many of them weigh as much as, if not more than, an elephant.

Although we will never fully understand how these rocks were moved, several ancient Egyptian writings and wall murals provide some insight. Stones, for example, appear to have been moved on sleds, most likely across wet sand. However, there is still much to discover, and this remains a fascinating area of experimental archaeology.

2. Pyramids appear to be aligned with the stars

The Big Dipper and the Little Dipper appear to have been employed by the Ancient Egyptians to position their pyramids in a north-south direction. This alignment is so exact that their north-south positions are within 0.05 degrees of precision. It is crucial to remember, however, that the alignment of the stars is always shifting, though at a very slow pace.

3. Pyramids are surviving because of the special mortar

An old Arab saying goes something like this: “Man fears time, time fears the pyramids.”

The builder’s choice of mortar appears to be part of the cause for the pyramid’s survival. The stones may have been fixed in place using a super-strong mortar, according to analysis. Furthermore, a significant portion of it was utilised. Approximately 500,000 tonnes of mortar were used in the construction of the Great Pyramid alone, according to some estimations.

4. There are secret doors inside the pyramids

The Queen’s Chamber, the Grand Gallery, and the King’s Chamber are the three main rooms of the Great Pyramid. Egyptologists have uncovered two 20-centimeter-wide tunnels that go from the Queen’s Chamber’s north and south walls and come to a halt at stone doors with copper handles. The doors were recently discovered by a robot. Some speculate that they may lead to a hidden room.

What did the Great Pyramid look like when it was first built? If some historians are to be believed, it’s quite amazing.

The Great Pyramid of Giza was encased in a well-polished casing of limestone blocks at the time of its construction. Some speculate that when the sun hit the shell, it would have glistened like diamonds and been seen for miles. Most of the blocks were broken off and reused on other construction projects through the centuries.

6. The Sphinx may have once been colorful

According to some estimates, the massive Sphinx statue was created near the Great Pyramid 4,500 years ago. It is known for having a lion’s body and a human’s head.

Pharaoh Khafra is thought to be its current likeness, but this may not have always been the case. According to some academics, the Sphinx may have had several facelifts over the course of its life. The presence of red pigment residues on the Sphinx’s face suggests that the statue was painted.

Most Egyptologists today believe that the Great Sphinx was created around 2,500 BC for pharaoh Khafre, the architect of Giza’s Second Pyramid.While its exact purpose is unknown, several interpretations claim that it was built to protect the pyramid.

7. The Great Pyramid of Giza is very very heavy

According to some calculations, the Great Pyramid of Khufu weighs a massive 5,750,000 tonnes. To put that figure into perspective, the Burj Khalifa is just 500,000 tonnes.

The Great Pyramid’s weight is predicated on the fact that it was constructed using an estimated 2.3 million stone blocks, each weighing 2.5 tonnes (2,268kgs) on average.

8. We think that the pyramids had more than four sides

P. Groves, a pilot, stated in the 1940s that the Great Pyramid has eight sides, not four. He saw indentations on each side that are barely visible from the ground but are clearly evident from above. Egyptologist Flinders Petrie observed in 1880 that the pyramid’s sides are “quite visibly hollowed” and that “each side has a sort of groove especially down the centre of the face.”

In fact, the grooves were confirmed by a laser scanning survey in 2005, but they were attributed to broken and removed stones. The faces can appear to be split under certain lighting circumstances. This has led to suspicion that the pyramid was built with eight sides on purpose, though there is no evidence to support this theory.

9. We may never really know how they were built

Despite the fact that these incredible structures have been the subject of numerous research for centuries, we still don’t know exactly how they were constructed. While many claims are made about some “groundbreaking” revelation concerning the process, they are all just theories in the end.

Given the enormous size of the bricks that make up the pyramids, this is especially true. We still have no idea how they were fashioned, moved, or hoisted into position. Obviously, it was achievable, but how did they go about doing it?

We may never know for sure.

While we have learnt a great deal about these fascinating old structures, they have not yet revealed all of their secrets. Researchers have recently uncovered a vast, unknown chamber inside the Great Pyramid of Giza using cutting-edge technologies.

The chamber was estimated to be roughly 100 feet (30 metres) long using particle physics, and it does not appear to have been wrecked by tomb robbers. It’s anyone’s guess as to what archaeologists will find within.

The Giza Pyramids are really deserving of their status as one of the world’s ancient wonders.